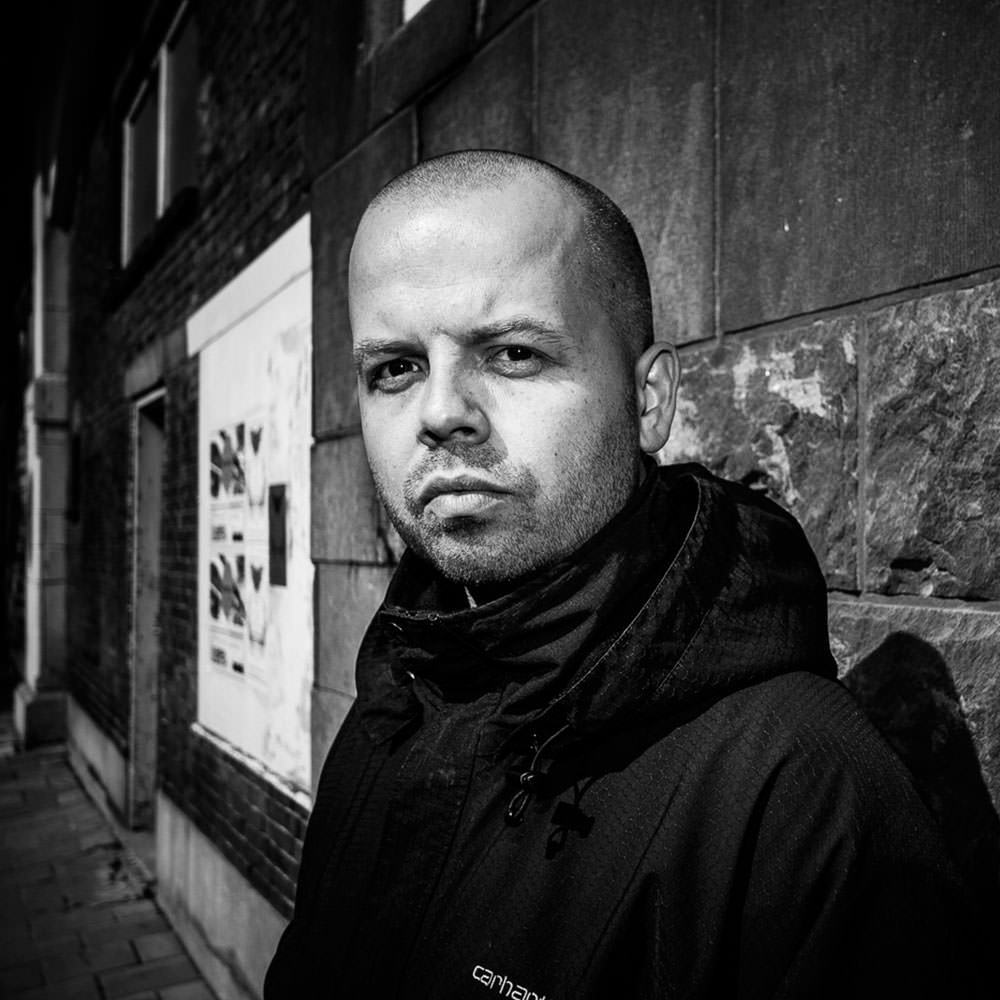 The Rotterdam based producer and DJ, Bas Mooy is one of Europe’s most respected techno artists and the driving force of Mord imprint. His label marks its 5th anniversary with a tour this year, and we are lucky to have Belgrade as one of the stops on the way. Mord label night in Belgrade’s techno cathedral is scheduled for this Friday, March 2nd, and ahead of the event we got the chance speak with this legend of underground scene. Bas Mooy spoke about his music, label and techno scene in the interview you’re reading below.

You were born in Rotterdam, a city famous for industry and heavy machinery. Tell me, in which way growing up in this city influenced your style of music?

I’m based in Rotterdam since my late teens actually. I grew up in a city very close and connected to Rotterdam, so the focus has always been on Rotterdam. I moved over in the nineties when I went to University, so I’m living here for the biggest part of my life. The city has always been a big influence to me, both in a personal and musical way. It’s a city of hard working people, a typical harbor city you could say, with a working-class mentality I feel comfortable with.

In your tracks we can feel the darkness that shivers all parts of the body, based on extraordinary, strong sounds. Can you tell me what your production is based on and why it’s so unique?

It’s always interesting how your music gets described by others, hehe. When you do something for a very long time you need to make sure you don’t get stuck at some point, get frustrated or lose the fun. I just try to produce in different ways most of the time, not going for a standard set-up or template I used before when I start a new track. I work with hardware and software and switch quite a lot between the machines I use. I’m just trying to keep it fresh and interesting, mostly for myself. I haven’t been in the studio a lot the past year, since I have some ear issues that have forced me to limit my time there. In a way that might have been good actually, since I was really eager to get back in the seat again. I’m trying to find a way to pick it all up again at the moment and actually just finished some new music, which is exciting, seems the time off has really charged the battery in a way.

In 2002. you and your friend Radial founded basically legendary label called Audio Assault. How did you came on that idea and what inspired you?

I just started working at Triple Vision Record Distribution back then and they were setting up their first distribution deals with labels such as Glenn Wilson’s Heroes and Planet Rhythm etc. I was dj-ing for a while already and just got in touch with Vincent de Wit and Carlos Rios, who were rocking a live set that really impressed me. After they played some gigs at my parties (also just started doing events around 2000) I asked them to be part of the first release on Audio Assault, which I just started with Jeroen Liebregts (Radial), who I knew through an old friend from high school. Marco, the owner of Triple Vision, wasn’t really enthusiastic about the sound at first, but he decided to give us a chance and immediately the record went off, after the promo vinyl was played at the closing party of the Love Parade. We managed to get a copy to DJ Rush via a friend that was playing with him at Awakenings Festival back then. He played it out and everybody wanted to know what the record was, including Rush himself. We got in touch with him and he was interested in doing a remix for us. The rest is history as they say…

For many years you were a member of Rotterdam underground collective called ‘Strictly Techno’. Did that change your view of music?

It was mainly a lot of fun. Organizing events with good friends and having friends and djs you respect over to our parties, being able to offer a stage for them and introduce them to the Rotterdam crowd. We had some legendary nights the past decades and even though we had our ups and downs, it was all worth it. I always used to have this love-hate relationship with doing events. The whole process was so time consuming and stressful and made me think about quitting doing parties for a while. But then the day after we would always be like: ‘ok, that was crazy, when are we gonna do the next one?’ Still, when I see a cool venue or an abandoned building I always immediately get the feeling I should do a party there. I’m not doing many events these days myself though, since I just don’t have the time for it at the moment. The heavy tour schedule is quite difficult to combine with organizing events, that’s also why I decided to step out of the ‘Strictly Techno’ project last year. We did some celebration events for the 25 year anniversary and then decided to put it in the fridge for now. Anyway, you never know what happens in the future. At this moment I mainly focus on the Mord Nights and especially the Mord 5 years tour we are currently doing. So far we already have about 25 confirmed Mord nights all over the world for 2018 and way more to be announced soon!

As someone who’s been present on the techno scene that long, what would you say changed to better and what to worse?

Well, it’s one of these questions I always have trouble answering, since I don’t want to sound like these old people that always complain about how good it all used to be back in the days. Of course the scene has become way more professional. Less cowboys, more professional promoters, which make it easier for the artists. Musical conditions are also way better these days then in the past, where sometimes you would come to a party and they didn’t even have monitors etc, hehe. I guess the scene has matured on most levels, but the downside is that when something gets big and more commercial it also attracts people that don’t give a shit about the music and don’t care about the techno scene we have been fighting for, many years on many levels. I always tried to make a difference in the scene, by running labels, organizing events, supporting new people etc, but there’s a lot of people out there that really don’t care about the actual scene itself. When it’s not popular anymore, they will move on to the next one. I also truly dislike the social media side of things right now and I try to stay away from it more and more. It seems that a lot of people just spread hate and negativity online, it’s very easy to get affected or frustrated by this, so I try not to read the negative comments out there. Some people seem to fill their days with hating online. I’m just happy to be able to run a label, where I can support new people, talent, fresh blood and to be able to make a living out of music myself by touring the world. I’m happy with how I run my label and I’m aware I will never be able to please everybody, so I just try to follow my own path. If you like the label I appreciate that, if you hate it, also fine, just don’t listen to the music then and focus on labels you do like, problem solved.

In your interview for Techno Motz last year, you mentioned the difficulty of organizing underground events, is it easier now when techno gained more popularity?

Of course it’s easier to organize events when the demand for something is bigger, but there’s also way more people offering the product so to say. When I started my events it was more of a niche scene I guess. And then when minimal came along, suddenly it was hard for us to get a 100 people into a venue, even with a big headliner. Now it’s easier I guess. In Holland some of the new guys sell out a 5000 capacity event, which is something that would have been impossible back in the days. It’s great to see how the scene is growing, but since it’s always working in cycles, it’s going to be interesting who will still be supporting techno when the bubble bursts so to say. Who will jump ship and who will stay on board. We’ve been in this situation before, but the scene seems to be more healthy these days and has a stronger base then before.

You are also the owner of the Mord label that this year celebrates its 5th anniversary. What Mord means to you?

Mord means a lot to me of course, Mord was about me re-inventing myself and finding what was the next step in my career. Mord gave me back the fun of running a label, finding new music, sorting out artwork. I got a lot out of it, got to meet so many amazing people, artists, promoters that host Mord nights and of course last but not least the crazy amount of people supporting the label by buying the music and visiting the events. I’m amazed every weekend with the amount of support and love I get for the label.

Speaking of Mord, which upcoming releases of your label we shouldn’t miss hearing?

We just released the Herdersmat part 16-18, a triple pack vinyl that was received very well. Loads of talented new people on there. Kamikaze Space Programme’s double pack will be out in a couple of weeks and right after that we got a double EP by Rebekah, who’s back after she contributed a track on the first Mordbox. Loads of other interesting new music coming up after that, but keeping that to myself for now.

I remember the photo you posted in which your children are watching you play, is it hard to be a parent, DJ gigging around the world, producer and a label boss? Are you children interested in techno?

It’s hard being away from your kids in the weekend, but I guess it’s hard for any parent to leave their kids in any other job also. I try to spend as much time with them during the week and try to keep some room in my touring schedule every now and then for a weekend off or fly out to a gig in the evening, which gives me the full day with them instead of being on an airport or in a hotel. I actually don’t mind travelling that much to be honest, also the hotel life suits me quite well, just get homesick sometimes, really miss my kids and being at home with the family.

You are coming to Belgrade, to our famous techno cathedral, Drugstore. Are you excited about this performance? What are your expectations?

Yes, I’m very excited to be back in Belgrade, great line up and the venue looks awesome! Las time in Belgrade was already really nice, so I def. expect this one to top it! Great to share the stage with my friends Stanislav and Milos (Lag). All ingredients for a great night are there!